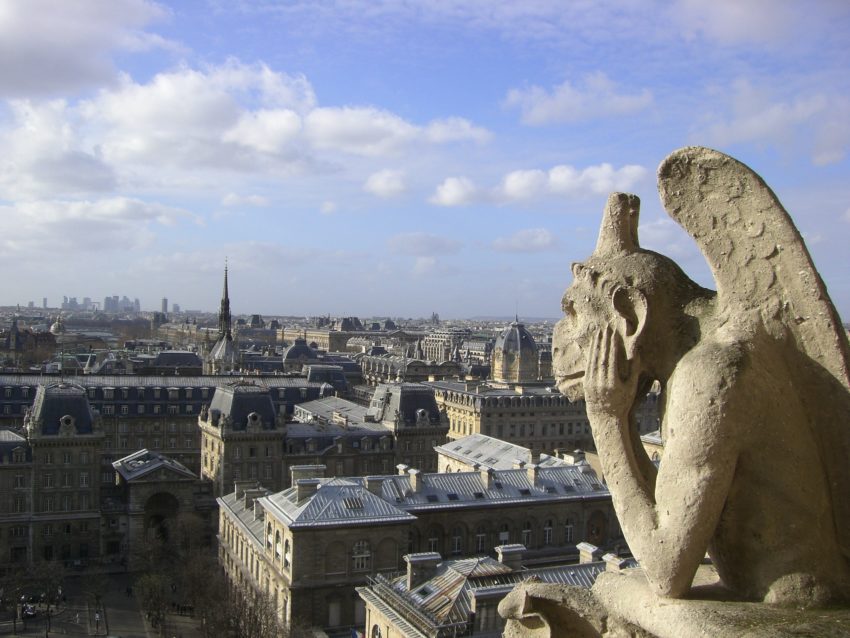 Despite the fact I consider myself to be stoic on my exterior there is something about exploring Paris that has me giddy as a school boy and prancing through the streets. While I may not actually be prancing I’m willing to admit that I feel the urge and for anyone who has visited Paris I’m sure they understand the feeling.

I’m quite sure that my flying monkey friend whose perch on top of one of the towers of Notre Dame would not understand my feeling. After he is even more stoic on his exterior then I’am….which considering the fact he is a statue makes sense. That said I wonder what he makes of all the tourists that much like me prance around the streets of Paris from his lofty perch high above us all?

As a permanently appointed guardian of Paris he has spent nearly 800 years casting his gaze upon the hordes of awestruck obnoxious tourists snapping their pictures while bumping into one another as they gaze back up at my flying monkey friend and envy his endless views of Paris. I would not think badly of him at all if thought us all to be a bunch of slack jawed yokels who are nothing but a stain upon the beauty of this marvelous city.

But then again having waited in a long line that winds along the northern side of Notre Dame to gain entrance to the tower tour that eventually leads me up to my flying monkey friend I have now had the opportunity to share his gaze upon the streets of Paris and found that I paid no attention to the throngs of tourist below. My gaze was fixed upon the artist’s street canvas that is Paris and from my own lofty perch atop the towers of Notre Dame I could not hear the street noise or feel the crunch of the crowds below, rather I could only see a masterpiece of city planning, an artists love letter to Paris.

The view is as intoxicating as a fine Bordeaux and my eyes were more then happy to get drunk off its colorful decadence. I remained fixated by the view next to my flying monkey friend and realized that if I had it my way I would stay right were I was…cemented in place like a statue. But then again…unlike my flying monkey friend…I understand the feeling of what it’s like to prance around the streets of Paris…and prance I will…