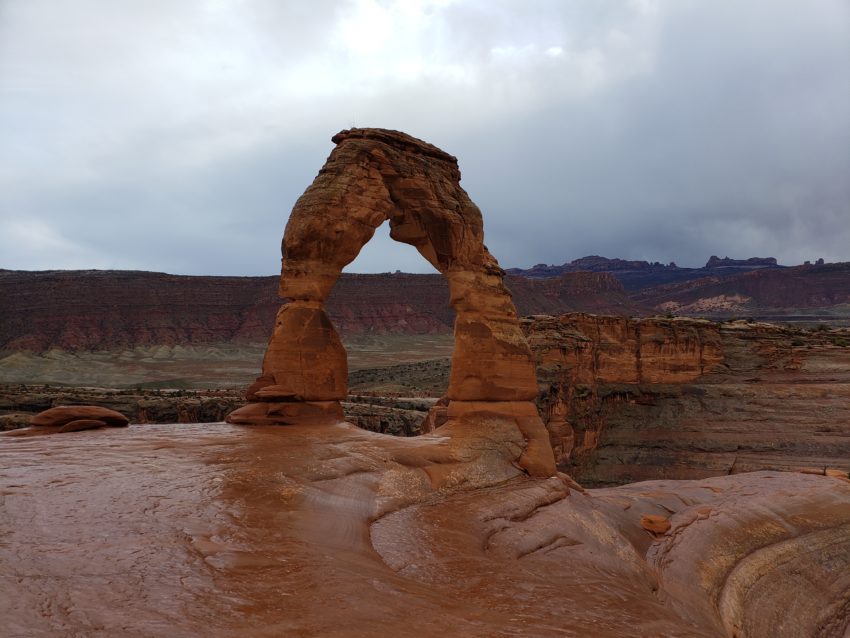 As a native Utahn I have long viewed Moab and the adjacent Arches National Park as my personal playground. As a general rule I have only visited during the dusty hot summer months where the red rock and blue skies bake under a bright yellow sun. Therefore I have but one type of experience with this rust red rock wonderland and that is of warmth and sunshine and perhaps a long afternoon nap on sun baked boulder.

The idea of visiting in March…much less early March…is akin to blasphemy in my book. A complete misrepresentation of what my sunny day attitude and experience with Arches is predicated on. To visit in a month where there is a greater chance of snow then sun and the rocks are cold to the touch would be like visiting an alternate universe. And yet my time to experience something I know all to well in a different light has come…

My father-in-law Ted has arrived in Salt Lake City for the week and I have agreed to take him on a tour de force of the some of the best National and State Parks Utah has to offer. We will kick things off in Arches National Park, then Canyonlands, Dead Horse Point, Goblin Valley and capping things off with Capitol Reef (yes as always the pun is intended). The catch is that we are at the mercy of the weather whims of Utah in March which is a winter redux with a chance of sun and a more than healthy dose of chill.

Ted is in town because his daughter Meredith is having her bachelorette party in Las Vegas and my wife Lauren will be on hand to both oversee and partee…(the rhyme is intended). I would of preferred they had put it off until April but when it comes to wedding plans for whatever reason my opinion was not sought out. I can’t imagine why….

As I suspected after watching the weather with the scrutiny of a bank manager during a safe count I came to the conclusion that March in Moab was going to be much like it is every year…grey and cold with a chance of snow. We got off to a late start to Arches National Park due to a massive snow storm hitting Salt Lake City. By noon it had cleared up and I decided to brave the slick roads of Spanish Fork canyon which is the most treacherous part of getting to Moab regardless of the time of year.

We ran into a blizzard at the top of the canyon that caused me to slow down to a crawl once I saw I couldn’t see ten feet ahead of me and when I did a saw a semi-truck in a U shape on the side of the road after an apparent accident. However once we hit the summit it cleared up by the time we arrived in Price and experienced a snow free drive until we reached Arches National Park.

The good news was there was not as line of cars running about about a mile out to the entrance like there normally is…in fact I just drove right through for the first time in nearly 20 years since international tourist began discovering our National Parks and the crowds began to swell to such numbers that even Edward Abbey would have troubles comprehending.

The bad news was it had started to snow yet again along with as stiff cold breeze and sky that was as dark and dreary as December. We arrived at the parking lot for Delicate Arch and found we were only the fourth vehicle there. Where it not for the intense cold and snow I would have sprung from the car in utter delight and skipped around the parking lot singing the praises of Abbey and his core beliefs that National Parks should be a haven for solitude not a zoo for hordes of lazy tourist.

But again it was cold as shit….and that very quickly curbed my enthusiasm. As I bundled up in layers and put on my gloves and a ski hat I questioned why I was allowing my once bright and sunny postcard vision of Arches to be ruined by a visit in cold dreary March. Then I looked over at Ted who was beaming in anticipation of hiking the trail to one of nature’s greatest accomplishments and I was reminded of just how lucky I was to be there.

We headed out into the cold and wind swept snowy landscape and made our way up the muddy trail until we hit the now slick rock that Arches is famous for. We were lucky that the snow was not sticking and as gazed into the surrounding landscape I was struck by both the familiarity of the trail and yet the stark difference of a snow filled day versus a sunny day with blue skies.

The snowflakes were poetry in motion, the red rock was shined and glistened with the added moisture and best of all there was silence and solitude. When we finally arrived at Delicate Arch there were only three other people there and I was treated to a vision of perhaps the most famous arch in the world that I had never seen before.

The red colored arch glistened with moisture and stood out against a dull grey sky while snowflakes whirled around all its wind carved curves like fluttering white butterflies. The stone bowl that spirals in front of Delicate Arch seemed to shimmer and shine as though it was covered with a thin layer of ice. The chill of this March snow no longer seemed like a liability but an added layer of beauty to a place I thought I knew like the back of my hand.

I was quite correct in thinking that a visit to Arches in the cold of March would be like visiting an alternate universe but in all the best ways possible. I saw the beauty of this marvelous landscape in a different light and in a different way. I experienced the solitude of nature that our National Parks should provide and I saw the look of pure joy on my father in law face as he experienced one of the natural wonders of the world for the first time.

While I can’t say I will make it a point to visit Arches again in the winter season and while I definitely prefer the sunny days and warm rocks to nap on like a lazy lizard in the sun; I will not soon forget the madness of winter in March and how it absolutely illuminated the beauty of Delicate Arch that I would have never experienced otherwise.