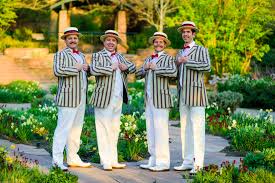 There is no greater joy then experiencing the onslaught of spring with the promise of a long lazy summer on the horizon.  Unless of course you happened to be at Pioneer Theatre this past Friday night to witness the magic of “The Music Man” which stole the hearts of all in attendance with toe tapping music and dance numbers against a magical backdrop of summer in the fictional River City, Iowa which was skillfully brought to life on stage to the delight of the audience.

Pioneer Theatre Company saved the best for last in presenting “The Music Man” as its final performance for the 2014-2015 season that included many highlights but nothing quite as spectacular as their production of Music Man along with a cast and crew that were perfectly hitting all the right notes. From the moment the curtain rose it was as though the audience had purchased a ticket not for a play but for ticket on a train headed for River City which is where the play begins as the stage is set for the appearance of the infamous con artist Harold Hill.

Upon hearing how difficult it is to sell the hard working folks in River City by the other salesmen on the train Hill (George Dvorsky) puts down his newspaper just as the train stops, thanks the bewildered salesmen for the tip, and jumps off the carriage into River City taking the entire audience along with him for the ride.

The set pieces and stage production of “Music Man” are truly a sight to behold as somehow the stage crew at Pioneer Theatre has managed to recreate the entire city in such painstaking detail that one feels as though they are strolling through the town square or sitting inside the cultural hall dancing along with the rest of the rather large and talented cast. Almost every aspect of River City is brought to life from not only the outside but from the inside as well through seamless transitions that takes the audience from one moment being inside the town library reading a book to the outside of the library as though they walked out the door themselves.

The magic of the set pieces are only out done by the brilliance of the dance numbers preformed by a huge cast that is flawlessly directed by Karen Azenberg who exhibits incredible skill in choreography with dance numbers that absolutely amaze and delight like the memorable performance of the song “Marian the Librarian” which involves almost the entire cast dancing around and on top of tables and bookcases while tossing books in the air like acrobats while Hill serenades Marian Paroo (Lizzie Klemperer).

Dvorsky plays Harold Hill with exactly the type of endearing panache that is required while perfectly pulling off singing duties with a voice strong enough to hit every note effortlessly while parading around the stage like the Pied Piper. Dvorsky has the looks of Mitt Romney along with a perfectly polished politicians sliver tongue that allows him to entrance not only the townsfolk but the audience as well.  But at the end of the day it takes two to tango and Klemperer provides a perfect foil as Marian with her powerful Broadway voice and enough girl next door charm that leaves the audience as well as Hill completely enamored.

“Music Man” is a musical that hits on all cylinders with literally every aspect of the cast, crew, and production team delivering a performance that is perfectly delightful and completely entertaining.  It is impossible not to feel as though you have been transported back in time to River City in 1912 and even harder to not want to sing and dance along with the cast on stage.

By the time Dvorsky and Klemperer romantically sing “Till There Was You” on a flower filled bridge under as fire fly lit night sky it becomes easy to understand why Hill, when asked why he can’t leave River City, says “I finally got my foot caught in the door” because based on the standing ovation given at the end of the night it was quite clear the audience was left feeling the same way.