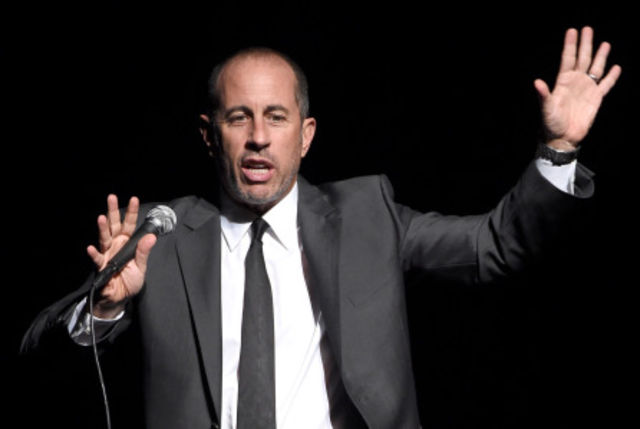 For most comedians a standing ovation is usually reserved for the end of a performance and not the beginning. Unless of course you happen to be Jerry Seinfeld and have a legion of loyal followers that spawned from a television show about nothing that spanned nearly a decade.  There certainly is something to the idea of nothing and judging by the constant applause and laughter from a very engaged audience this past Thursday night at Abravanel Hall it’s clear that Seinfeld still has the corner market on it.

While nearly 18 years has passed since the television hit Seinfeld ended its record breaking run the man whose name and unique brand of observant humor once headlined the show is still doing just that as a one man act on stage.

Seinfeld’s brand of humor is iconic as it is dated. While more modern edgy comedians like Jim Jeffries drink beer on stage Seinfeld still drinks bottled water.  While most comedians today make it a point to dress down Seinfeld still dresses up in a suit. Even though the comedic trend seems to drift towards bombastic, vulgar shock value Seinfeld still sticks to what made him famous in the first place, sharp social observations fueled by wit rather than vulgarity.

For example Seinfeld led off by congratulating the audience for making it to the show in the first place despite all the obvious barriers and effort that goes into leaving the house.  He then follows that up by lamenting about all the effort it takes to get somewhere simply leads to a realization that you just can’t wait to leave.  Or perhaps as an even a better example the connection he make between our growing dependence with energy drinks and the fact it’s no surprise we need heavy sedatives to sleep at night. These are the types of simple humorous observations that stand the comedic test of time and are refreshingly relevant even in an age when the humor of a television show like Seinfeld has long since been replaced by the edgier content of shows like It’s Always Sunny in Philadelphia.

Judging from the age group of most people in attendance, along with the exorbitant price of tickets, it was quite obvious that Seinfeld was catering to a crowd that grew up watching his popular sitcom and were as much enthralled with his mere presence as they were his jokes. Seinfeld put on a performance that seemed right out of the quick standup comedy bits that preceded most of his television shows making it easy to imagine how the creative process would’ve evolved from his stand up styling’s to the silver screen.

During one particular humorous bit about our growing dependence on Viagra and Cialis and the fact one should see a doctor if an erection lasts longer than four hours it was quite easy to imagine how that could translate to a Seinfeld episode where Jerry and the gang spend twenty minutes trying to figure out the best way address the problem with a physician.  Who else could spend nearly 15 minutes waxing poetic about the invention of the Pop Tart the way Seinfeld does and invoke such sincere laughter over something that really is nothing?

Although his brand of humor has stayed mostly the same it has aged along with the man himself as Seinfeld’s humor is starting to morph into an older somewhat crankier version of Larry David, his co-creator on Seinfeld and star of the long running series Curb Your Enthusiasm.  He admits at one point that the best part of being 61 years old is that it’s so much easier to just say no and that by the time he hits age 70 he won’t even bother responding at all.  While he was once a famously single bachelor he is now a self professed family man who is convinced that the birth of his children is simply a diabolical plan to replace him.

Seeing Seinfeld perform on stage is like seeing the creation of his popular television series unfold before your eyes and for those who loved his show it’s much like seeing a long lost friend.  Yet despite the fact nostalgia is a driving force behind Seinfeld’s popularity it impossible to deny that the man is still a sharp witted comedian at the top of his game. Even though he may be known as the creator of a show about nothing, as he says himself during the show, words have meaning, which is why his brand of social humor will always have something relevant and funny to say.