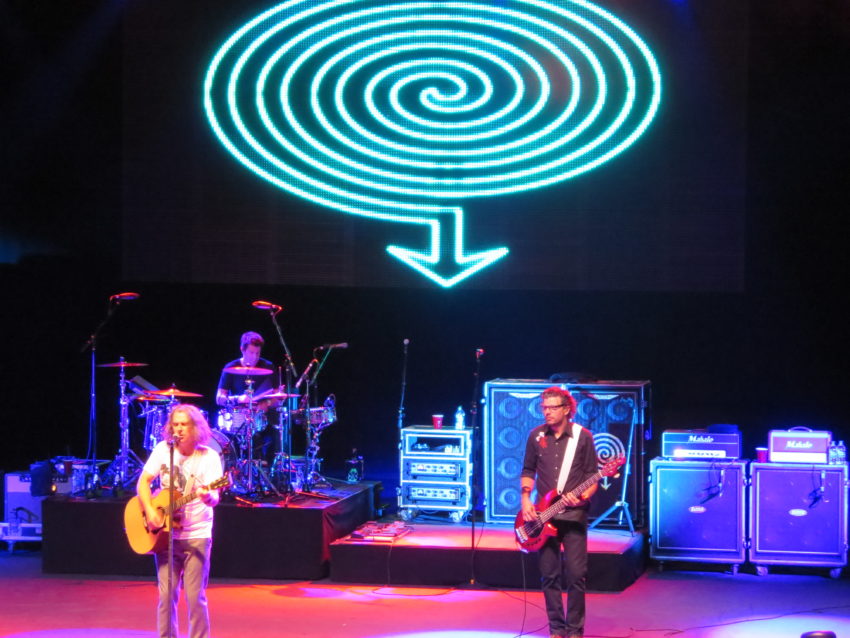 On a nearly perfect June evening at the Sandy Amphitheatre Collective Soul kicked off the summer season this past Thursday with their signature brand of energetic rock and roll delivered with great aplomb to the delight of a sold out crowd. The band came out to the sounds of Aerosmith’s “Back in the Saddle” which seemed ironic because Collective Soul has never been out of the saddle in the first place. Over the last 20 years the band has been a consistent, powerful force on the rock and roll scene churning out 9 albums, including their new upcoming album, and releasing a slew of number one radio hits that draw fans to their shows like flies to honey.

What sets Collective Soul apart from other cookie cutter rock bands that never made it out of the 1990’s is that Collective Soul doesn’t rely on their past successes to fuel their live shows. A Collective Soul concert is a celebration of the past and a glimpse into the future as the band confidently fuses their crowd pleasing hits with new songs that leave fans lusting for more. Thursday nights show was no exception as the band came out swinging  by playing two songs from their new album that had the crowd clapping along in rhythm as though it was already a fan favorite.

After whetting the crowds appetite with new material the band wasted no time reminding the audience that they haven’t forgotten what got them here in the first pace as charismatic lead singer Ed Roland teased fans by saying “Now we want to play a few songs you’ve heard way to many times, but your going to hear them again this evening.”  This was a promise fulfilled to the tune of the band playing 15 of their hit songs that have graced radio’s for nearly two decades and yet, based on the crowd’s response, still haven’t lost their luster.

One staple of Collective Soul’s unique brand of rock is their ability to go from jamming out with heavy power guitar riffs that have fans head banging to the beat to gentle soul stirring acoustic melodies that leave fans searching for their lighters. At one point during the show Roland took a well deserved break by drinking carbonated water which guitarist Jesse Triplett joked wasn’t hardcore. Without missing a beat Roland responded with “Well lets go hard core”.  The band jolted the crowd with energetic, frenzied renditions of power rock favorites like “Heavy” and “December” and then transitioned seamlessly to beautiful acoustic versions of “She Said” and “Home” that featured just the solo guitar and ageless voice of Roland, who has the talent and confidence to go from arena power rock to coffeehouse acoustics at the drop of hat.

Whether it was divine intervention or simply a pleasant confluence of weather patterns and perfect timing the band played one of their biggest hits “The World I Know” during the peak moment of the sun setting in the horizon.  The audience was treated to an atmospheric symphony of crisp rhythmic guitar chords building to a crescendo in perfect cadence to Roland’s passionate vocals against a visceral backdrop of a fiery sunset that painted the evening sky with an orange red tint bathing the Wasatch Mountains in a heavenly glow.

While  the appeal of Collective Soul attracts a wide  range of fans  the majority of the crowd was older and that, combined with the fact beer wasn’t being sold, may have contributed to the initial lack of energy from the crowd. This changed dramatically when the band play another new song, which Roland dedicated to his wife, that combined an acoustic opening that went in the direction of a ballad before veering off into a powerful electric guitar riff supplemented by the lyrics “I want a lover like  you”. If hearing what will surely be a future classic Collective Soul hit wasn’t enough to get the crowd on their collective feet it was the surprise appearance of a guitar toting Roland dancing through the crowd that sealed the deal. While nimbly avoiding being crushed by a swarming throng of rabid fans Roland somehow was able to continue playing and singing while still posing for selfies with a few lucky fans before escaping back to the stage to finish the song. After this dizzying display of panache and showmanship the majority of the crowd remained on their feet for the rest of the evening.

It was a good thing that fans initially conserved their energy as Collective Soul gave them more than their money’s worth by playing 19 songs which took the show late into the moonlit evening. A nearly full moon inspired Roland enough that during their encore performance he conjured up lyrics to a brand new song tailored to his loyal Utah fans. Roland began to randomly strum some chords he had come up with the previous night and prodded the rest of the band to fall into sync with him as he begin to sing the lyrics “I surrender to the Utah moon”.

During an exclusive interview with the Daily Utah Chronicle after the show Roland was asked if that moment was planned in advance.  Roland related that is was purely an organic, off the cuff moment. “I thought the crowd was great,” said Roland, “I felt so comfortable doing that song, Utah moon, so we were like okay let’s go with it. To me I base it off how the crowd reacts and I thought it was great, they were great to us. The audience allowed us to feel comfortable to do things like that.” It remains to be seen if “Utah Moon” will ever see the light of day on a future album but one thing is for sure, after hearing the crowd’s response to Thursday night’s show its clear Utah fans have surrendered to the charms of Collective Soul.