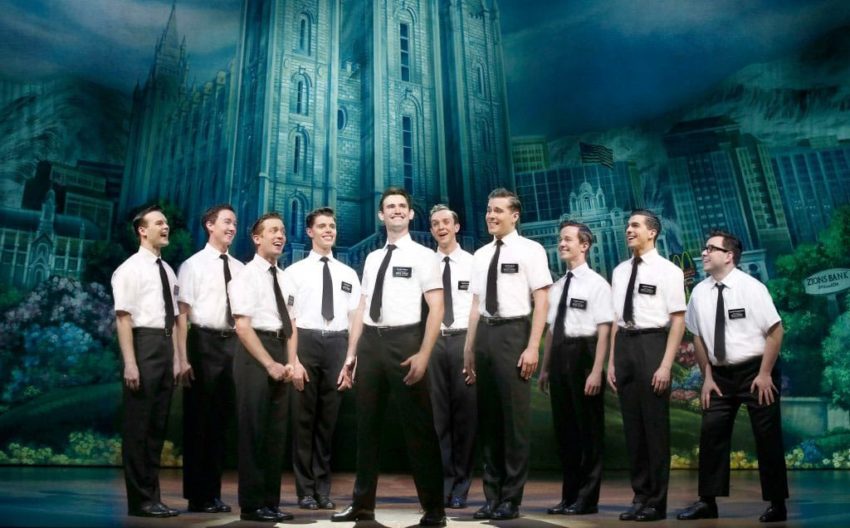 Having dinner in a fancy restaurant is as much about the ambience as it is the actual menu no matter how delicious the food is the atmosphere of the location is often the real draw. In many ways the same can be said for Broadway musicals, sure it may be a thrill to see “Les Miserable” but what about seeing it in Paris? Imagine seeing “Oklahoma” in Oklahoma City or even better seeing “Wicked” in the magical Land of Oz.  While the latter may not exist there was certainly magic in the air when the Tony award winning “The Book of Mormon” made its stage debut in the Mormon stronghold of Salt Lake City.

The incredibly popular musical made it Broadway debut back in March of 2011 to almost universal acclaim from critics and audiences alike and nearly four years and nine Tony awards later the show finally made its long awaited debut in Salt Lake City. The musical is famous for its satirical skewering of the Mormon faith and what better place to deliver its unique brand of humor and music just a few blocks away from Temple Square? It’s not often that an audience will cheer wildly at the opening of a musical but that was exactly the case at Capitol Theatre when the curtain rose for “The Book of Mormon” to the delight of a very diverse and exuberant crowd.

From the very beginning when an effeminate speaking Jesus Christ lights up in a sparkling neon glory it’s clear that the influence of producers Trey Parker and Matt Stone, who also created “South Park,”  are on full display. The dynamic duo have made a career of crude yet hilarious satire without the burden of worrying about who they may offend and their recipe for success is evident in “The Book of Mormon” from the very get go.

From a clever twist of ripping off the “Lion King” with a slightly different take on “Hakuna Matata” with the song “”Hasa Diga Eebowai”, which due to content can’t be translated in print, to a particular South Parkesque scene where a group of Ugandan’s use frog fornication and pantomiming mass defecation to retell the story of the origin of the Mormon faith its clear that the influence of Parker and Stone are indelibly stamped all over the musical.

Depending on one’s perspective “The Book of Mormon” is a delicious serving of spot on satire or an incredibly offensive barrage on a topic that is sacred to many. However what can’t be denied is the fact the musical is incredibly funny and at times borderline brilliant in both its humor and its catchy toe tapping songs that even the most die hard Mormon won’t be able to resist singing along with. But then again it’s a wildly offensive, glove’s off, comedic beat down of a religion that has recently taken more than it fair share of shots in the national spotlight. But as the cast delightfully sings in the number “Turn It Off” sometimes its best to do just that and enjoy what is a non stop laugh fest that absolutely delights.

Part of what makes “The Book of Mormon” so irresistibly funny is that the producers of the show have clearly done their research on the Mormon faith and its unique culture. While there are a few inaccuracies, like how the Mormons danced with Ewoks upon arriving in the Salt Lake Valley or that the angel Moroni descended from the Starship Enterprise, many of the references to the Mormon religion and culture are spot on and hilarious especially to those who are familiar with the faith. Even practicing Mormons would appreciate the at times contentious but ultimately good natured interplay between Elder Price, played by Billy Harrigan Tighe, and Elder Cunningham, played by A.J. Holmes specifically to those who have served missions themselves.

Yet all perceptions about religion and Mormons aside the truth of the matter is that “The Book of Mormon” at its heart is centered on catchy musical numbers that are as entertaining as they are offensive but are guaranteed to elicit laughs. It’s hard not to be entertained by the musical number “Spooky Mormon Hell Dream” which will hilariously and horrifically spook even the most wayward individual to the straight and narrow. Who wouldn’t be entertained by less than forthright retelling of Mormon history in “Making Things Up Again” which includes appearances by not only Joseph Smith and Moroni but a few Hobbits as well.

Perhaps the real reason for the packed house at Capitol Theatre was not so much about the musical itself but the fact Salt Lake City is finally given its due credit in the song “Sal Tlay Ka Siti” in which our fair city is referred to as paradise and the most perfect place on earth. Quite frankly there aren’t many opportunities to hear some of the best voices of Broadway serenade the merits of living in Salt Lake City which makes seeing “The Book of Mormon” worth the price of admission for that alone. But then again you might want to take it tongue in cheek as one Ugandan villager puts it in the play, “Salt Lake City is an idea, a metaphor,” which essentially sums up the entire point of a musical that is not meant to offend but to simply entertain and in that regard “The Book of Mormon” is a rousing success.