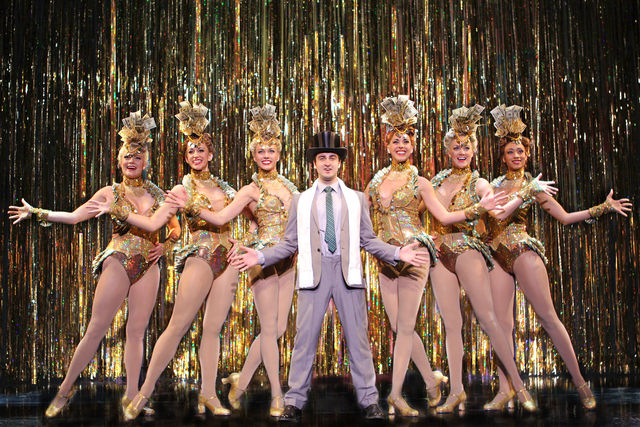 February is generally known for snow, groundhogs, and overspending on roses and heart shaped chocolates.  This year however, at least for theatre lovers here in Salt Lake City, February will also be full of song, dance, and hysterical hilarity when the Tony Award winning hit musical “The Producers” brings its comedic genius to the Capitol Theatre stage from February 2nd through the 7th.

“The Producers” is a musical that was adapted from the 1968 film of the same name by Mel Brooks who also produced the film version.  The story follows the exploits of two money hungry theatrical producers who scheme to trick investors into supporting a Broadway flop while secretly pocketing all the cash.  The musical opened in April of 2001, starring Matthew Broderick and Nathan Lane, and ended up winning a record breaking 12 Tony Awards while spawning a 2005 film version with Broderick and Lane reprising their respective roles.

“Mel Brooks is just a homerun. He is so ridiculously funny and I still catch myself laughing at jokes that I have been delivering for months,” says Michael O’Connor who is part of the ensemble cast. “It’s the way he sets up his humor as a one two punch along with extremely well developed characters that are living in a world of absurdity.”

O’Connor grew up watching Mel Brooks movies like “Young Frankenstein” and “Blazing Saddles” and always found the humor to be right up his alley. He starred in “The Producers” while in college at SUNY New Paltz and fell in love with it right away and relates that it’s what made him want to do theatre as a career.  After graduating in 2014 he moved to New York City and was working in a dinner theatre when he went to an open call for “The Producers” and to his surprise landed a role in the musical.

“It’s something I didn’t expect to be happening so soon. To get the call for my first real big boy job was just so surreal and exciting,” says O’Connor.  “The whole experience has been eye opening. I’m so happy and humbled to be part of this production.”

While O’Connor admits he was very fortunate to land a job doing exactly what he always dreamed of doing right after graduating from college he has some advice for current students who are chasing dreams of their own.

“Patience is huge. You can’t just graduate and expect people to just hand you jobs. There is a lot of hard work, dedication and patience,” says O’Connor.  “You just have to trust it will eventually happen and that you have a great support system in place”

Initially O’Connor was concerned about maintaining his enthusiasm for the show as the current tour has nearly a 100 productions spanning five months. Most of the shows he did in college only ran for a few weekends and so he was worried that he might get bored with it. However “The Producers” is one of those rare shows where the humor never gets old and if anything gets even better.

“I sit in the wings watching sometimes and constantly find myself laughing at all the jokes,” relates O’Connor. “I’m still having fun and the fact we keep changing venues every couple of shows helps keep things fresh and keeps me on my toes.”

The cast is thrilled about their upcoming visit to Salt Lake City as it represents the longest stay of their entire tour and a chance to get some well deserved rest while performing in front of what likely will be a packed house every night of its limited run.

“We are all super excited about Salt Lake,” says O’Connor. “We are excited to perform for any audience who is willing to invest the time to come see us. This is a show for people who want to laugh their butts off at these ridiculously larger than life characters.  Salt Lake City we are coming for you.”

A limited amount of tickets are still available at the Capitol Theatre box office and online at http://saltlakecity.broadway.com