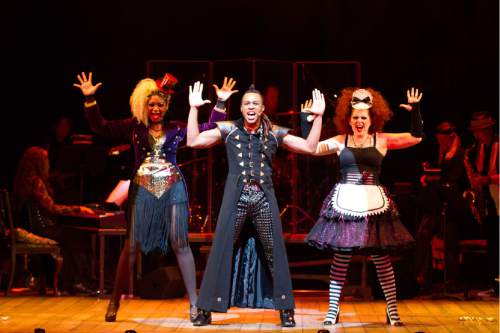 The weather is cooling and the blazing reds and oranges of the leaves indicate the onslaught of the fall season and, perhaps even more importantly, the fact that the Halloween is just a few weeks away. While trick-or-treating and costume parties are on the minds of most students, there is no better way to get in the spooky mood of the season than by experiencing “The Rocky Horror Show Concert Version,” which premieres this week at Pioneer Theatre Company for a limited run.

“The Rocky Horror Show” is satirical tribute to the age-old popularity of horror B-movies that likely delighted our grandparents and are still campy enough to attract the curiosity and, more often than not, laughs of our current generation. The production tells the story of a young and tightly-wound married couple who get lost in the woods on a stormy night and end up meeting the delightfully deranged mad scientist Dr. Frank N. Furter who gleefully proceeds to corrupt the conservative couple. PTC is producing the concert version of “Rocky Horror,” which is a choreographed production of the show with an on-stage orchestra, costuming and a limited set.

This year’s production features Utah local Will Swenson, who just finished a run playing Javert in the Broadway production of “Les Miserables” and has been cast as Dr. Frank N. Furter. Additionally, Utah State Senator Jim Dabakis (D-Salt Lake County), will be playing the role of the narrator for the second straight year and will undoubtedly delight audiences with another stellar performance.

Prop kits are available for purchase, and the audience is more than welcome to throw the curious contents of the kit around the theater, which means there is a good chance you may end up with some popcorn in your hair and, if you’re lucky, a plastic hot dog.

The best way to get into the spirit of the Halloween season is by witnessing the cultural phenomenon that “The Rocky Horror Show” has become and seeing for yourself why it has developed such a fervent and devoted cult following.

Last year’s production did not allow for a Student Rush, which for other shows gives U students a chance to experience theater at a reduced price. This year, however, PTC has made a limited amount of tickets available for Student Rush for the show’s run, beginning Oct. 22 and 23 at 8 p.m., with two showings on Oct. 24 at 5 p.m. and 10 p.m. U students with a valid UCard may purchase up to two tickets for $5 each (regularly $25 – $45) beginning one hour before curtain time at the PTC box office. Regular priced tickets can still be purchased at the box office and online at www.pioneertheatre.org