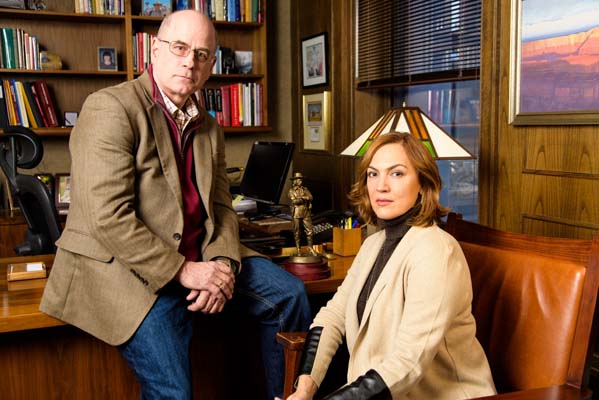 If all the world’s a stage and art serves to imitate life then it’s easy to understand why many theatre audiences are drawn to the simple pleasures of musicals and comedies.  But every once in a while comes a play that asks us to think instead of laugh and to wax philosophical rather than tapping our toes to a catchy tune. This past Friday night Pioneer Theatre Company presented the world premiere of “Two Dollar Bill” which asked audiences to do just that with a thought provoking performance.

“Two Dollar Bill” tells the story of Bill Dudley, played by Mark Zimmerman, who is a tenured history professor at an elite university forced to face the mistakes of his past as his credentials are challenged when a book he has written is nominated for a major award. The play unflinchingly challenges audiences to consider whether a small mistake should be allowed to unravel a lifetime of good and if the end actually justifies the means.

“Two Dollar Bill” cleverly uses Dudley’s love of history to serve as a metaphorical backdrop to the present circumstances he is facing. When being challenged by his graduate assistant Ron Ellis, played by Corey Allen, over a decision he makes to give a student caught plagiarizing a paper a second chance, he asks Ellis to consider the historical context of generals on the battlefield to him understand his methods.  Later in the play he tells Ellis that history is meant to help those in the present learn and grow from their mistakes. The irony is that Dudley is essentially giving that advice to himself as he struggles to deal with his past catching up with the present.

Dudley doesn’t pull any punches when it comes to defending himself for his past actions and has no issue with letting everyone who will listen that his little white lie pales in comparison to all the great things he has accomplished. While it becomes easy to sympathize with his plight it also becomes impossible to ignore the collateral damage that everyone around him is facing as a result of his lie including the dean of faculty Jessica McGovern, played by Lesley Fera, who happens to be his wife as well as his boss.

While it might have been tempting to turn this play into a tantalizing drama about the marital interplay between Dudley and McGovern, T.J. Brady, who wrote the script, instead keeps the focus centralized on the debate at hand. Does the end justify the means? Should Dudley be given a second chance because of the greater good he has accomplished even though it may have been derived from what essentially is a meaningless lie?

Brady, who has written for the television series “Lie to Me” and “Narcos”, shows off his flair for the dramatic and character development by skillfully crafting a script that quickly engages the audience in the unfolding drama from the very first scene.  Brady has created characters that are all at once sympathetic in one moment and completely distasteful in another. It’s clear that Brady doesn’t want   the audience to become attached to any one character and allow that allegiance to take away from the argument at hand. The genius in the play is not so much in character development but in the larger questions it’s asking the audience to consider.