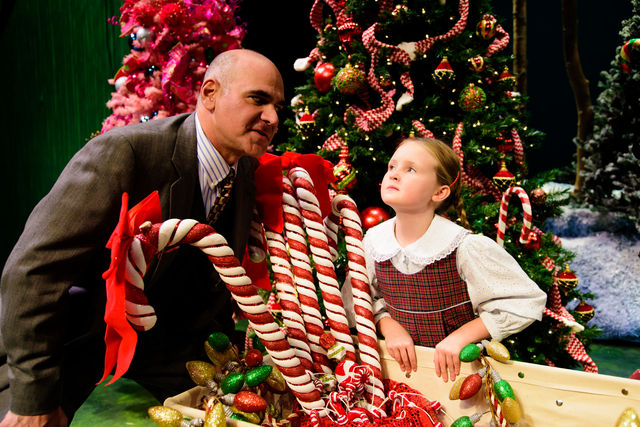 For many people Christmas is the most stressful time of year when the pressure of crowds and commercialism often turn the season of cheer into a season of fear.  However there is hope on the horizon as Pioneer Theatre Company has found a way to remind us why this is the most wonderful time of  the year with the sweet and sentimental  holiday musical “It Happened One Christmas” which premiered this past Friday.

“It Happened One Christmas” is an original production conceived by PTC Artistic Director Karen Azenberg  and playwright Kenneth Jones that weaves a tale of Christmas magic that occurs in an abandoned Salt Lake City theatre which determines whether or not there will be snow on Christmas day.  Apparently there must be some truth to the legend as that is exactly what happened this past Christmas which perhaps provided the inspiration for this delightful musical that invokes the spirit of the season in all its holiday glory.

Azenberg and company have gone out of their way to present a production that shamelessly promotes  everything we love about Christmas into a free flowing  musical revue that has enough holiday cheer to turn even the most Grinch like Scrooge into a rosy cheeked Kris Cringle. “It Happened” is short on narrative but heavy on song and dance in a production that is a near seamless series of skits that each showcase a theme of Christmas that spans generations and yet still remains universally appealing.

Featuring over twenty Christmas favorites with song and dance numbers that skip from era to era without missing a beat “It Happened” is holiday musical feast for the eyes and ears that has the audience humming and tapping their feet along with a very energetic and enthusiastic cast.  From an ode to the late 1950’s with the ever popular “Rockin’ Around the Christmas Tree” to a incredibly clever hip hop version of “Joy to the World” performed by a very talented children’s cast with just about everything else in between there is something for everyone to enjoy.  However it can be argued that the audience favorite was clearly the interactive “12 Days of Christmas” that you have to experience to fully appreciate.

Associate Director and Choreographer Lenny Daniel, who also stars in the show, does a spectacular job of making this musical what it was meant to be, a holiday spectacle.  Each dance number is as diverse as the song being sung and seems to flow as though the music was created for the choreography and not the other way around.  The dance number “Linus & Lucy” in particular is a mesmerizing waltz in a winter wonderland that manages to pay homage to the timeless “A Charlie Brown Christmas” while still making the audience feel as though they are experiencing it for the first time.

While the cast of “It Happened” is a joy to behold in both song and dance the true star of the show is the scenic design created by resident scenic artist George Maxwell whose stage wizardry creates magical set pieces that capture the very essence of Christmas as though he plucked it straight from the mind of a sleeping child dreaming of sugar plums on Christmas Eve.  From what begins as a barren stage of an abandoned theatre is quickly transformed into pure Christmas bliss in a blink of an eye. It’s like watching a slideshow of Hallmark’s greatest hits of timeless Christmas cards brought to life along with the soundtrack of perfectly matched holiday tunes.

It’s clear that Azenberg and Jones set out create a holiday masterpiece that would appeal to the masses and stay true to our shared memory of Christmas that the entire production team diligently and successfully recreated for a delighted audience.  “It Happened” is a near perfect blend of catchy songs, memorable dance numbers and unforgettable set pieces but the true magic of the evening was a performance that appealed not just to the children in the audience but to the child in every adult as well.