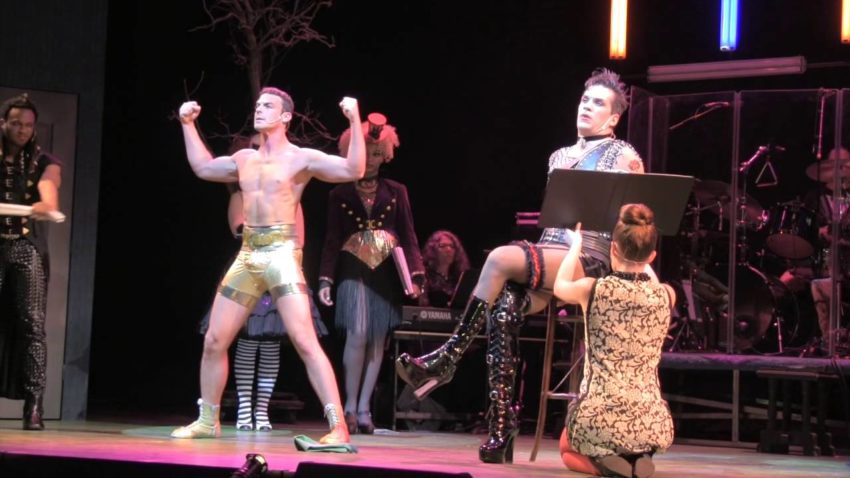 In most cases Pioneer Theatre Company is a place where dreams become a reality and the imaginations of some of the most creative artists of our time are presented on the stage for all to enjoy and appreciate. However this past Thursday night the PTC stage was all about the art of rock and roll with its highly energetic and entertaining presentation of “The Rocky Horror Show Concert Version” along with an audience that was more than willing to let their hair down and party along with the cast.

“The Rocky Horror Show”, which is based on 1975 musical comedy horror film directed by Jim Sharman and starring Tim Curry, has developed a rabid cult following that PTC has tapped into following a successful run last year with the very same production.  It’s a rare occurrence when the audience is filled with just as many characters as those on stage and even rarer when a production strongly encourages their participation.  However it’s just that right amount of audience irreverence that adds even more color to an already colorful performance.

It helps of course that prop kits are sold in the lobby before that show containing everything from popcorn, toilet paper and perhaps best of all latex gloves along with instructions on how best to utilize them during the show.  This is the first sign that “The Rocky Horror Show” is not exactly the normal fare that PTC presents as part of their otherwise more civilized offerings. The second sign would be the grand entrance of the shows star  Frank ‘N’ Furter, played by Will Swenson, who appears out of a plume of smoke to thunderous applause all while wearing a black leather corset that would make even the most dominant dominatrix blush.

The show starts out with popular songs like “Science Fiction Double Feature” and
“Damn It, Janet” but they end up serving like the opening band at a rock concert that warms up the audience for the arrival of the main event and without a doubt Swenson’s performance as Furter is more than worthy of his top billing.

Swenson, much like his cinematic counterpart Curry, brings a towering and dominating presence to the role of Furter with a physicality that is all at once feminine and masculine without any clear definition between them. As a self described “sweet transvestite from Transsexual, Transylvania” Furter is a character you have to see to appreciate and Swenson does a more than credible job of enveloping a character that pays homage to the performance of Curry while still adding his own personal touch.

Swenson owns the stage with a performance that is impossible to ignore and a voice that is clearly Broadway quality with just the right amount of rock opera flair. Whether he is prancing along with his latest muscle bound creation or cutting off the hand of his former protégé Swenson proves to be a delightfully combustible mix of menace and charm.

But as impressive as Swenson is at the end of the night he takes a backseat to the true star of the show which is clearly the audience. In between throwing popcorn or tossing around blown up latex gloves while referring to certain characters on stage with expletives that can’t be printed it’s the fervent fan boys and girls in the audience that take the show to nearly intoxicating heights of enjoyment.  Whether it’s adding to the dialogue at just the right moment or dancing in the aisles to songs like “The Time Warp” the audience proves exactly why a cult following can give extended life and relevance to a production that would otherwise seem dated and well…really weird.

By the end of the evening the festive audience left the theatre in much worse condition then it was before they arrived. The remnants of a wild and crazy evening were evident as the floors were littered with popcorn, toilet paper, newspapers, confetti and foam hotdogs representing what must be an absolutely nightmare for the janitorial staff to clean up. However after what was clearly a rousing success for the second straight year at PTC it’s quite likely that the nightmare will continue for years to come.