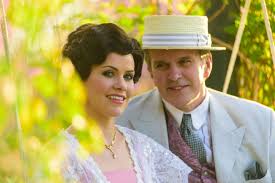 For the young at heart, there is no better way to spend an evening than being swept away into the musical magic of River City. The iconic Tony Award-winning musical “The Music Man” will be marching into Pioneer Theatre from May 1 through 16.

Very few musicals have the staying power to delight fans of all ages the way “The Music Man” does. Then again, very few musicals have a lead character as endearing as Harold Hill, whose charm is only outmatched by a delightful musical score that will have the audience singing along with the cast.

“This is an iconic piece of musical theatre,” said George Dvorsky, who plays Harold. “Some of the most recent musicals are not written as well and some of the music is not as good. This musical is a perfect example of a more simple time.”

Set in the lazy dog days of summer in the fictional River City, Iowa, “The Music Man” tells the story of a shrewd con man (Harold) who plots to trick the good citizens of River City out of their money by posing as a professor of music, despite not knowing the difference between a treble clef and a trumpet. The hardworking folks at Pioneer Theatre have gone out of their way to convince the audience that they are actually in River City by painstakingly recreating the period.

“The costumes are amazing and the set is incredible, you really feel like you’re back in 1912,” said Dvorsky. “It’s a fascinating period piece that you can fall right into. It’s really a wonderful journey.”

Dvorsky certainly relates to this feeling of being out of place, something that Harold faces in the show. Originally planning on being a football player in school, he decided to join the school choir on a whim after breaking his arm and discovered that he could sing. Carnegie Mellon was where he fell in love with acting, and nearly 37 years later he has traveled the world sharing his musical and acting talents on stages as far away as Italy. Despite living an exciting life, he is still thrilled at the opportunity to play Harold and perform in Salt Lake City.

“Pioneer Theatre is one of the most respected theaters in the country,” said Dvorsky. “Everyone I know who has worked here has said ‘you got to get a chance to work out there because you’re going to love it.’”

“The Music Man” has managed to transcend time and is still very much part of popular culture. It has been parodied in television shows like “Family Guy” and most notably in the popular “Simpson’s” episode “Marge vs. the Monorail,” written by Conan O’Brien.

Part of the reason for its enduring popularity and success is the catchy music but a larger part is, as Dvorsky relates, simply the story itself.

“This story is really about believing in something and having enough faith to want to change your life for the good and that’s why even today people can really relate. It’s just such a wonderful show,” he said.

Tickets for “The Music Man” are on sale now at the Pioneer Theatre box office and online at www.pioneertheatre.org.