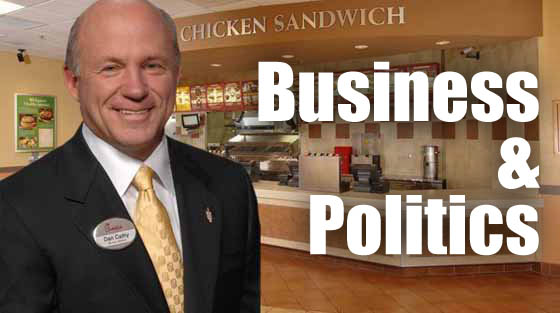 There once was a time when I could toast the glory of a morning sunrise with a piping hot cup of fresh Starbucks coffee without choking on the sharp bitter taste of the company’s outspoken political rhetoric sliding down my throat like poison. I can almost remember the days when I could enjoy a delicious Chick-fil-A grilled chicken sandwich with a side of crispy waffle fries and a ice cold Dr. Pepper without wondering if in doing so I was helping to prevent marriage equality. I long for the days when I could purchase a picture frame from the nice lady at the checkout line at Hobby Lobby without wondering how she was paying for birth control since her company refuses to cover it under her insurance plan.  Despite the fact that politics and religion don’t mix CEO’s of major companies like Starbucks and Chick-fil-A  see fit to incorporate personal political rhetoric into their products like a razor blade in a Cracker Jack box, something that consumers didn’t ask for and could certainly do without.

Chick-fil-A made headlines in 2012 when its president, Dan Cathy, gave an interview affirming his unwavering support for traditional marriage which led to a public outcry from the LGBT community and eventually boycotts of Chick-fil-A and their delicious but politically tainted chicken sandwiches. The bitter aftertaste of this unwanted distraction has continued to have a lasting effect. Fox News reported that earlier this month Ventura High School in California banned Chick-fil-A sandwiches from being sold by the football booster club because of concerns that people would be offended by what Chick-fil-A stands for, which apparently is no longer its divine waffle fries and chicken nuggets. Despite the fact that Chick-fil-A was offering to donate 200 meals for the football booster club the school decided that because the chicken franchise wasn’t inclusive of marriage equality that it should be excluded from being able to make charitable donations to the football program.

Starbucks has been aggressive with its support of marriage equality and in 2012 publically backed a Washington state bill which eventually legalized same-sex marriage.  This led to a boycott by the National Organization for Marriage which organized a “Dump Starbucks” campaign. According to CNN Money the CEO of Starbucks, Howard Schultz, responded to investor complaints about the company’s support of same-sex marriage by saying if they were unhappy they could “sell your shares at Starbucks and buy shares in other companies.” While Schultz wasn’t directly saying that supporters of traditional marriage weren’t welcome to invest in Starbucks he certainly made it a point to pour a healthy dose of same-sex marriage rhetoric into every cup of coffee that the company serves.

Hobby Lobby recently took a rather personal and political stance against the Affordable Health Care act that required businesses to cover birth control under the Health and Human Services contraceptive mandate. This past summer the Supreme Court ruled that Hobby Lobby did not have to go against the owner’s Christian beliefs and provide birth control to its employees through their insurance plan.  This naturally led to a boycott of Hobby Lobby that included outspoken actor George Takei and actress Scarlett Johansson who even designed a t-shirt mocking Hobby Lobby’s stance.  This of course leaves conflicted customers wondering if by buying a couple thumb tacks and a box of crayons that they are inadvertently supporting our global population crisis.

Corporations like Chick-fil-A and Starbucks should take a minute to remind themselves that they are in the business of selling chicken and coffee and not political rhetoric. They are not agents of social change; they are purveyors of high quality, overpriced products that tingle taste buds to the delight of their diverse customer base. However when companies choose to serve up an order of religion and politics as a side dish that the customer didn’t ask for it’s both invasive and divisive. These types of actions create an unwelcome distraction to a service or product that should be free of personal politics instead of creating a personal divide with customers. Perhaps in a future far far away corporations will remember the adage of how religion and politics don’t mix and take that type of rhetoric off the menu.