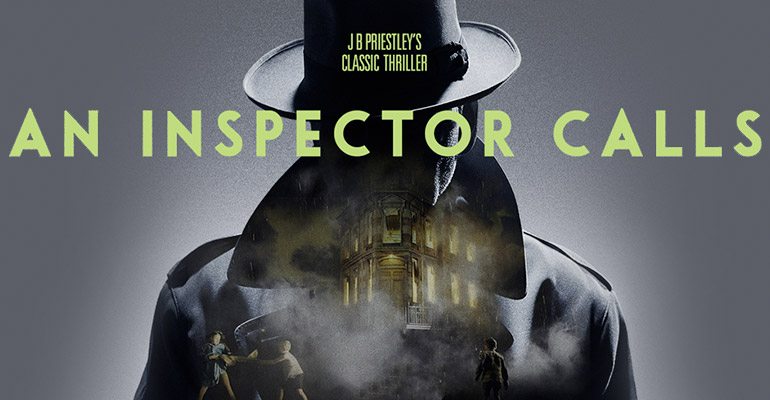 “It absolutely a masterpiece mystery combined with masterpiece theatre like Downtown Abbey,” says director Mary Robinson. “My thinking is anyone who likes Downtown Abbey will really like this because it has a lot in common with it but at its heart is also a mystery thriller.”

“An Inspector Calls” is set in the turn-of-the-twentieth century England and follows the story of a prosperous family who is gathered for a celebration only to have it interrupted by the arrival of a mysterious Inspector who is investigating the death of young woman from a lower social class. While at first none of the family members claim to know who the victim is as the evening progresses they find they all had hand in the young woman’s death in ways they never imagined.

“This play brings up some philosophical ideas in terms of society,” says Mia Dillon who plays Sybil Biring. “In this country we have this ultra rich one percent and this underbelly of struggling people who are barely getting by. I think that’s what makes this play extremely relevant is the questions the Inspector poses.”

In many ways this play is as much a social commentary as it is a mystery thriller as the narrative encompasses the struggle that many people in lower social classes face and the indifference to their plight by those who are more affluent.  With the current presidential election cycle upon us candidates, such as Bernie Sanders, have focused on the great divide in our social classes which makes the timing this play intriguing.

“There has been this whole question about raising the minimum wage and the question of the different classes and how they connect with each other,” says Robinson.  “Unfortunately that’s a story that’s never going to date.  I think that something we can always examine in ourselves so I think this play is more relevant then ever.”

Although there are many social themes throughout the play the engine that drives this production is the fast paced narrative of suspense and mystery that encompasses the love the British have for detective stories like Sherlock Holmes.  Although the original British production was a three –act drama with two intermissions Robinson decided to have the PTC’s version run straight through without a break.

“We considered taking intermissions but we wanted to keep going while we have the audience in the palm of our hand and we didn’t want to lose them so them so they can go out and buy a drink,” says Robinson.  “As an audience member if I’m engrossed in a play I don’t want to have a break, I would rather have the experience all in one sitting.”

In an era dominated by the Netflix inspired binging habits of our generation it makes sense to condense the play to its current ninety minute run time and just let the audience become thoroughly engrossed in its captivating storyline.

“This whole experience has been one smooth journey towards excellence where everybody is working so hard from the designer to the director to the actors,” says Dillon. “Its one of those rare instances where there are no obstacles. Your running full speed ahead and it’s thrilling. Everybody is working at their best and it starts with a really good play.”

Despite the fact that it’s a period piece set in 1912 this is a play that was in part brought to PTC with university students in mind.

“We have already had some students see it and they found it very compelling and engaging,” says Robinson. “It’s a very entertaining play. Its  beautiful and thought provoking and hopefully moving at times so its all the things you would want in a piece of theatre.”

Tickets for “An Inspector Calls”are on sale online at www.pioneertheatre.org  and at the PTC box office. U students can get tickets for as little as $5 during “Student Rush” which are available an hour before any performance.