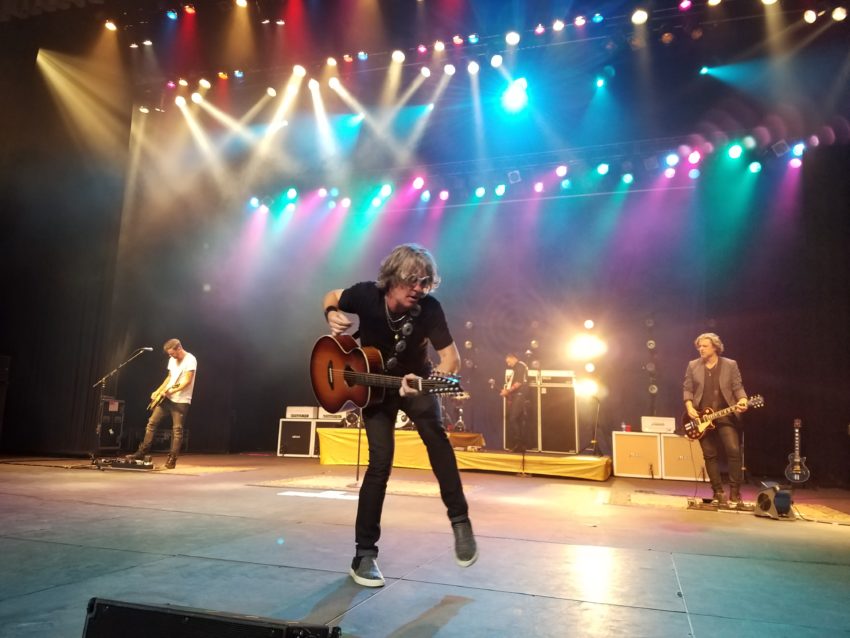 If you have listened to rock music at any point over the last two decades you have heard the band Collective Soul. You may or may not recognize the name but your ear’s have certainly been indoctrinated to the unique brand of power rock infused with gentle ballads and catchy lyrics that have helped to set Collective Soul apart from the legions of alternative rock bands that spawned in the mid 1990’s and then disappeared into the dawn of the new millennium. It would be nearly impossible for a fan of alternative rock to not have heard one of their seven number one hits or any of their 19 Top 40 singles from one of their eight studio albums. Collective Soul is a band you know by sound if not by name.  For those who are unfamiliar with the band a chance to rectify this travesty and finally put a name and face to the tunes you already know is just around the corner. Collective Soul will be returning to Utah this summer when they play at the Sandy Amphitheater on June 12th at 8:00 p.m.

In an exclusive phone interview with The Daily Utah Chronicle, Ed Roland, lead singer for Collective Soul, reflects on the bands 20th anniversary and how he never doubted that Collective Soul would be successful in an industry where bands often have the shelf life of a loaf of bread.  In fact Roland seemed surprised when asked if he ever thought the band would be still be around 20 years later.

“Yeah actually I did, I mean that’s the game plan,” says Roland, “I love writing songs, it’s part of my daily routine. I still don’t see an end to it, I get enthused, it’s still fun.”

Part of the reason for their continued success is that the main core of the band has remained intact which can be attributed to the fact they have know each other since they were children. Roland’s brother Dean plays rhythm guitar and Will Turpin, who plays bass guitar, lived right across the street from the Roland’s.

“We all grew up together; we knew each other’s quirks. I’m ten years older than these guys, I remember them being born,” reflects Roland, “We knew when to be there for each other and we knew when to smack somebody upside of the head and it’s nothing personal.  We all have the same goal to be the best band and put the best music out there.”

Another key to the prosperity of Collective Soul is that they have a brand of music that is unabashedly rock and roll. They are proud of who they are and work hard to cultivate a sound that represents their brand and the result has been millions of albums sold including their 1995 self titled album “Collective Soul” that went Triple-Platinum along with a rabid and loyal fan base that continually sells out shows. If the Blue Oyster Cult needed more “cowbell” in their sound, then what the music industry needs is more authentic rock and roll in their offerings and that’s exactly what Collective Soul provides.

“That’s what I personally write, that’s what I grew up listening to and once again I think rock and roll cannot be defined. I go back to my heroes, the Beatles, one song would be a beautiful ballad and the next would be tripping and screaming,” says Roland, “To me once you start putting a label on what you’re doing, there is no way out. The only rule in rock and roll is truly there are no rules.”

Another major influence for Roland, who writes the vast majority of the band’s songs, is Sir Elton John who collaborated on song with Collective Soul, “Perfect Day”, which was featured on their fifth studio album “Blender” that was released in 2000.

“Elton John is the one who inspired me to want to write and play music. So he has always been my hero and so to have my hero come in and acknowledge me and then have dinner, gave me the courage to say hey play on a track with us and he says of course if you let me sing,” says Roland, “It’s like the greatest reward a band could ask for to have their hero part of any recording, especially having Elton sing a song that I wrote.  It’s hard to explain, that the reason I started writing was because of him and then 15 years later he is singing with you. It’s the coolest feeling ever.”

The music industry is an insatiable slave to money and popularity and when it comes to the long term success of bands, fame can be as fleeting as a train passing in the night. Despite their second album going Triple-Platinum Collective Soul found themselves in a legal dispute with their manager that left the band wondering if the ride was already over.  They pooled their money together from the $150 a week they were being paid and rented a cabin on a cow farm in Stockbridge, Georgia to record what would end up being their third album “Disciplined Breakdown.”

“That one is special to us because we didn’t even know if we would continue to be a band because we were in lawsuit with our manager and we weren’t even supposed to be recording,” relates Roland, “I brought the recording gear and I wanted to make the recording personal. I wanted it to sound like when we were sitting at the kitchen recording this. It does have its own sound, a different sound, but it’s an honest sound and that’s what I wanted. It was about catching that moment and what we were feeling at the time.”

That experience helps to sum up the independent and creative nature that Collective Soul uses to fuel their success and the love they have for making music. The struggles the band went through despite their initial success prepared them for the next, and arguably the most challenging, stage of their career when they decided to make a break from Atlantic Records and venture into the uncharted waters of going independent.  In 2001 they released a greatest hits album “Seven Year Itch: Greatest Hits 1994-2001” which fulfilled their contract with Atlantic and allowed them to form their own independent label El Music Group.

“We were the first ones to do it and we take pride that we were the first ones to say we have a brand and we are going to be independent.  It took a lot of courage,” says Roland, “I remember talking to the band and telling them I wanted to do it and everyone was a little nervous and hesitant. We wanted to focus on our strengths and weaknesses. I think the best person who knows that is not someone sitting in New York City who has never seen the band play but the band members who are going on stage every night and understand what we are lacking and what our strength is.”

While choosing to go independent was clearly fraught with risks the bold move has given the band a second wind that has bestowed on them a greater sense of freedom and creativity with their music that may not have been available if they had been restricted by a major record company. Perhaps most importantly it gave them the ability to control their own destiny and personalize the music they were creating, though it also meant taking on their own financial burden in the process.

“Atlantic was great, they never even knew we were making a record, we would show up and say here’s a record and they would go, oh, great,” says Roland, “When your independent your writing the check out of your own banking account. You become a little bit more aware and listen to more of the details because there is a little more riding on it.”

Being independent also allowed Collective Soul to try new things that not only appealed to them as a band, but to their fans as well. In 2012 the band embarked on their “Dosage Tour” in which they played songs from their popular 1999 platinum certified album “Dosage”. They started each show playing the entirety of the album, took a break, and then came back on stage and played some of their other hits from past albums. The tour proved to be successful and was a delight for fans, many of whom paid over a $100 for tickets that included meeting the band. This type of creative strategy that was employed for the Dosage tour is an example of the freedom that being independent brings to the band.

“Atlantic never interfered but that doesn’t mean they wouldn’t have. We would of liked more interference from them or something,  we often felt there was nobody there,” says Roland with a laugh, “Being independent there is no one to answer to but us. So there is a lot more freedom so we just sat around and said let’s play Dosage all the way through and play the hits after that and everyone said that sounds fun let’s go do it. It was that simple, whereas Atlantic might have gone, wait a second.”

What makes Collective Soul relevant after all these years is the fact they don’t live off doing tours that showcase the success of the past.  They continue to churn out new albums including their pending ninth studio album “See What You Started By Continuing” that is due to be released this summer.

“It’s been four years since we released a record; it’s been too long actually. We took a year off to basically regroup,” says Roland, “I’m not saying this record is the best record Collective Soul is ever going to make because if that’s it we should stop right now. You can sometimes go and record and get stuck with that and look back and go oh man if we had only rehearsed a little bit more, or made this part a little more interesting.  You want to put out perfection or the best you can be but you want to capture that moment. You can over think it and it’s easy to do because once again we control our own destiny and there is nobody to answer to.”

Because there is no one to answer to the band is able to take the time they need to put out the best album possible but perhaps more importantly, they don’t feel as though they have to try everything out in the privacy of a studio.  While Collective Soul may not have their album out by the time they visit the Sandy Amphitheater in June, fans can be rest assured that the band will play many of their new and unfinished songs during their show.

“I want that openness; I want people to pretend, for a lack of a better term, that they are in my living room. We are real guys, we screw up, but we take pride in what we do,” relates Roland, “To me that’s the best way to learn a new song, you can practice all you want to but the best practice is in front of real people and we love taking the risk.”

“That’s one of the first shows we played and we felt like that night we finally became a band,” relates Roland, “ It kind of felt spiritual to us, like okay this is where we found ourselves as a band. So it’s always been special to us for that reason really. I love Salt Lake.”

It’s clear that fan’s here in Utah feel the same way about Collective Soul.  Tickets for their June 12th show at the Sandy Amphitheater go on sale May 12th.  Tickets can be purchased at http://smithstix.com/events/item/root/collective-soul-jun-12