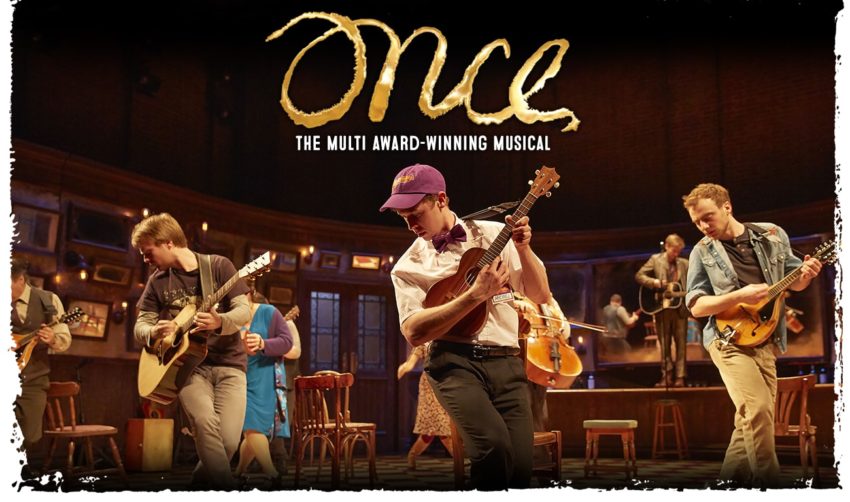 Every once upon a time comes a musical that is worth its weight in gold and will leave you falling slowly in love with both the music and the characters. This past Tuesday night at Kingsbury Hall the Tony Award winning musical Once slowly but surely mesmerized a willing and appreciative audience with a folk rock musical feast for the ears stitched together by a realistic and yet bittersweet love story that resulted in a thundering standing ovation by the evening’s end.

While most audiences are used to being overwhelmed by Broadway musicals that are backed by sweeping cinematic scores and intricate colorful set pieces that look like they are part of a movie set Once, instead, serves as an example that less is more. With a minimalist theme that focuses purely on the music and the story Once comes across much like a indie film at the Sundance Film Festival, which ironically is exactly what the musical is based on. The movie version was filmed on a minimalist budget in just 17 days with the director using natural light and actually shooting at friends houses to save money, the musical version is a nod to its indie roots and spirit which is part of what makes the musical such a joy to behold.

The entire musical has but one set piece which realistically creates the backdrop of a Dublin bar with as a cast that not only acts but serves as quite literally the entire orchestra. While the dialogue is dominated by the growing romance between Guy (Stuart Ward) and Girl (Dani de Waal) the supporting cast remains on the stage at all times with their instruments in hand and ready to accompany the songs being created by Guy and Girl.  The production manages to create a feeling that the audience in quite literally in the heart of Dublin without ever quite leaving the bar where Guy and Girl meet and share their love of music as their burgeoning romance unfolds.

Nothing goes to waste in this production, every movement, word spoken, or note played is perfectly weaves itself into the quick paces narrative fueled by songs that will be remembered long after the musical ends. When Guy and Girl first sing the duet “Falling Slowly” with Ward on the guitar and De Waal on the piano it’s hard not to fall in love along with them both as they sing a song that is achingly beautiful while creating a yearning for the experience of falling in love and then having it torn away. It’s clear that every member of the cast was chosen for their skills as musicians first as Once feels like being at a intimate folk rock performance in the basement of a bar or small club.

Ward is phenomenal as the broken hearted Guy who turns his intense sorrow at his girlfriend leaving him into music that tells his story of his heart better than words could ever to justice to. Ward sings as though he though he wrote the music and experienced his characters loss himself with as a deep powerful voice that seamlessly transition from soft and sensitive to a deep yearning growl that thunders through the theatre showering the audience with his pain and lust. De Waal is a perfect foil to his untamed passion exhibiting a gentleness and joy for life that is infectious and impossible to ignore.  From the moment she greets her piano with a child like “hello” which she then plays it like it’s an extension of her soul while serenading both Guy and the audience with a  gentle yet powerful voice of her own its easy to understand how Guy could fall hopelessly in love with her.

Once heavily relies on the strength of its hauntingly beautiful music which fuels the heart and soul of this musical that is almost the anti-thesis of the average bombastic Broadway production.  Through its minimalism and reliance on music to tell its realistic but bitter sweet love story Once succeeds on a level that can’t be seen but rather heard. It becomes a unique theatre experience in which the audience and stage disappear as the lights dim and it becomes as though Guy and Girl are the only people in the theatre as they create their love for each other through song that is accompanied by the instruments and voices of the supporting cast that builds to a rising crescendo that at all at once illuminates the theatre with an emotional awareness that is unique to every individual in the audience. It’s in those moments that Once truly becomes a once in a lifetime experience that shouldn’t be missed.